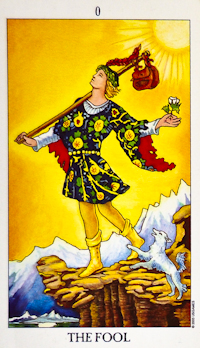 The master number 22 holds a unique position in the Tarot deck. Theoretically, the Major Arcana begins at key 1 and continues through key 22. The Minor Arcana begins at 23, the King of Wands, and continues on to 78, the Ten of Pentacles. The Fool, as key 0 stands by itself, representing the God force. 22 would seem to be missing; however, since cyclicity is the essence of life, there can be no ending. Therefore, the Fool, key 0, is the life force before entering manifestation, and 22 is that same key 0, the Fool, having walked the 21 keys of the Major Arcana to complete that full cycle and step once more beyond the present incarnation. 22 is an ancient numerical symbol for a circle, and therefore represents the Alpha and Omega, by which the Lord described Himself in the Bible.

The word Fool comes from the Latin, follies, meaning a bag of wind. Every genius is called a fool at some time, and that which contains air or breath could be called a bag of wind; therefore, we are the Fool in that sense. The Fool is the super-conscious, pictured here as having room to take one more step. This indicates that we never come to the limit of our potentials.

The white Sun is the universal radiant energy eternally rising, for it can never reach its zenith. The mountains indicate attainment. They are cold and uninteresting to many. But from their peaks melting snow feeds the streams and makes the valley fertile. So, too, ancient wisdom will feed your consciousness and transform your life.

The Fool's wreath symbolizes victory. His wand is a measuring tool by which we continually evaluate our accomplishments. His wallet contains memories of the past, and the eagle on the wallet symbolizes the awakening of higher vision toward loftier aspirations.

The dog under the Fool's control is the subhuman forms of life that are elevated by the evolution of the consciousness. The white rose in the Fool's left hand indicates that his desire is pure or spiritual and untainted by lower desires and passions.

The Fool here is the cosmic life force about to descend, inexperienced, into the world of manifestation. 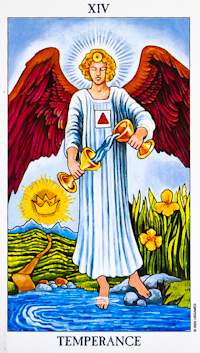